15 After these things the word of the Lord came to Abram in a vision[maybe Abram was hallucinating], saying,

“Do not fear, Abram,
I am a shield to you;
Your reward shall be very great.”

2 Abram said[how do you respond to a vision unless you’re hallucinating. Making things up], “O Lord God, what will You give me, since I am childless, and the heir of my house is Eliezer of Damascus?” 3 And Abram said, “Since You have given no offspring to me, one born in my house is my heir.” 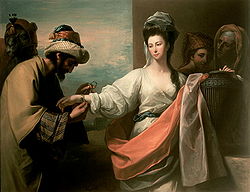 4 Then behold, the word of the Lord came to him, saying, “This man will not be your heir; but one who will come forth from your own body, he shall be your heir.” 5 And He took him outside and said, “Now look toward the heavens, and count the stars, if you are able to count them[Abram was a privileged dude, God wakes him from his sleep or is the dude sleep walking?].” And He said to him, “So shall your descendants be.” 6 Then he believed in the Lord[we can deduce here that before this he didn’t believe in the Lord, or this wouldn’t have been said]; and He reckoned it to him as righteousness.

7 And He said to him, “I am the Lord who brought you out of Ur of the Chaldeans, to give you this land to possess it[why has the lord to identify himself unless Abram has other gods?].” 8 He said, “O Lord God, how may I know that I will possess it?” 9 So He said to him, “Bring Me a three year old heifer, and a three year old female goat, and a three year old ram, and a turtledove, and a young pigeon.” 10 Then he brought all these to Him and cut them in two, and laid each half opposite the other; but he did not cut the birds[if the birds are still alive, indulge me, were they hypnotized? How did he convince them to not fly away?]. 11 The birds of prey came down upon the carcasses, and Abram drove them away.

12 Now when the sun was going down, a deep sleep fell upon Abram; and behold, terror and great darkness fell upon him. 13 God said to Abram, “Know for certain that your descendants will be strangers in a land that is not theirs, where they will be enslaved and oppressed four hundred years[he is still a good god, one who condones slavery. If he knows what is going to happen in future, and these are his chosen people why not avert it or as has been said elsewhere, these stories are written after the exile and are thus no prophecy].14 But I will also judge the nation whom they will serve, and afterward they will come out with many possessions. 15 As for you, you shall go to your fathers in peace; you will be buried at a good old age[no news here, it’s a given he would die].16 Then in the fourth generation they will return here, for the iniquity of the Amorite is not yet complete.”

17 It came about when the sun had set, that it was very dark, and behold, there appeared a smoking oven and a flaming torch which passed between these pieces[creativity at its best, Abram’s god must love BBQ]. 18 On that day the Lord made a covenant with Abram, saying,

“To your descendants I have given this land,
From the river of Egypt as far as the great river, the river Euphrates:

19 the Kenite and the Kenizzite and the Kadmonite 20 and the Hittite and the Perizzite and the Rephaim 21 and the Amorite and the Canaanite and the Girgashite and the Jebusite[as i have said elsewhere, why would Abram’s god give him land belonging to others unless he likes causing conflict? Is there another justification for this?].”

Commentary on research and media reports on food safety

Girl On The Move

It is what you don't expect... that most needs are looking for.

MY LIFE IN WORDS

The magic is in the mystery.

Diary of a Person Being Human
whitespades

So awkward the air knows
How I Lost My Chains

I've Learned The Most Unlearning Everything I've Ever Known