The last few days I had taken a short break from our bible study to  read what others have been up to, visit the museum and just bum. Louis Ginzberg, in the Legends of the Jews, narrates the events prior to the meeting of the brothers, their actions, Rebekah’s involvement and god’s or his proxies participation in the whole drama.

That out-of-the-way lets hear the story of Jacob and brother, shall we;

33 Then Jacob lifted his eyes and looked, and behold, Esau was coming, and four hundred men with him. So he divided the children among Leah and Rachel and the two maids. 2 He put the maids and their children in front, and Leah and her children next, and Rachel and Joseph last. 3 But he himself passed on ahead of them and bowed down to the ground seven times, until he came near to his brother [what does he think of his brother? is he using the members of his family as human shields against 400 men?]. 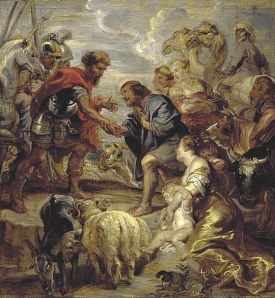 4 Then Esau ran to meet him and embraced him, and fell on his neck and kissed him, and they wept. 5 He lifted his eyes and saw the women and the children, and said, “Who are these with you?” So he said, “The children whom God has graciously given your servant.” 6 Then the maids came near with their children, and they bowed down. 7 Leah likewise came near with her children, and they bowed down; and afterward Joseph came near with Rachel, and they bowed down. 8 And he said, “What do you mean by all this company which I have met?” And he said, “To find favor in the sight of my lord.” 9 But Esau said, “I have plenty, my brother; let what you have be your own[ this could be one of the few honest members of Abe’s household or is he wary of his brother a great supplanter?].” 10 Jacob said, “No, please, if now I have found favor in your sight, then take my present from my hand, for I see your face as one sees the face of God, and you have received me favorably. 11 Please take my gift which has been brought to you, because God has dealt graciously with me and because I have plenty.” Thus he urged him and he took it.[ I hardly meet 97 year olds running to meet each other. Jake has an elaborate greeting prepared for Esau just incase he still remembers the deceit his brother is capable of]

12 Then Esau said, “Let us take our journey and go, and I will go before you.” 13 But he said to him, “My lord knows that the children are frail and that the flocks and herds which are nursing are a care to me. And if they are driven hard one day, all the flocks will die. 14 Please let my lord pass on before his servant, and I will proceed at my leisure, according to the pace of the cattle that are before me and according to the pace of the children, until I come to my lord at Seir.”

15 Esau said, “Please let me leave with you some of the people who are with me.” But he said, “What need is there? Let me find favor in the sight of my lord.” 16 So Esau returned that day on his way to Seir. 17 Jacob journeyed to Succoth, and built for himself a house and made booths for his livestock; therefore the place is named Succoth[ I thought he was going to follow the brother to Seir].

18 Now Jacob came safely to the city of Shechem, which is in the land of Canaan, when he came from Paddan-aram, and camped before the city. 19 He bought the piece of land where he had pitched his tent from the hand of the sons of Hamor, Shechem’s father, for one hundred pieces of money. 20 Then he erected there an altar and called it El-Elohe-Israel.[ last time a member of the first family bought land they were burying one of the beloved and laying legitimate claim to own the lot. I thought he was coming to live with his brother, why deceive him to go first if the intention is to go his separate way? ]

Commentary on research and media reports on food safety

Girl On The Move

It is what you don't expect... that most needs are looking for.

MY LIFE IN WORDS

The magic is in the mystery.

Diary of a Person Being Human
whitespades

So awkward the air knows
How I Lost My Chains

I've Learned The Most Unlearning Everything I've Ever Known