Your genial host will be away on holiday beginning tomorrow till 6th of January 2014. In this time we don’t promise we will be able to write any posts, respond to your comments or visit your very lovely blogs. We hope however that you shall still find something worth reading on this blog that you may have overlooked or that for some given reason you have a new interest in. That is the good news.

We celebrate our birthday on the 25th of Dec and towards that end, we shall be receiving presents 😛

We take this opportunity to sincerely thank you, one and all for your continued friendship, visits, comments and likes and most of all for the insights you have shared. If you have felt slighted, we apologize. If you felt your questions were not answered, ask them again, we promise to look at them when time allows.

We wish you all happy holidays and a prosperous new year!

As a bonus, here is a photo of Jean- Pierre Hallet whose story has been the subject of this post. 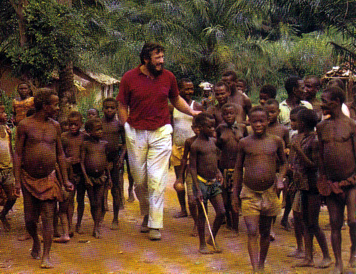 Jean-Pierre Hallet and the pygmies

My great friend and teacher shared with me a story about the Efe people taken from The Pygmy Kitabu by JEAN-PIERRE HALLET and ALEX PELLE [yours truly is yet to read the book but I will relay the story nonetheless.

One fine day in heaven, God told his chief helper to make the first man. The angel of the moon descended. He modeled the first man from earth, wrapped a skin around the earth, poured blood into the skin, and punched holes for the nostrils, eyes, ears and mouth. He made another hole in the first man’s bottom, and put all the organs in his insides. Then he breathed his own vital force into the little earthen statue. He entered into the body. It moved… It sat up… It stood up… It walked. It was Efé, the first man and father of all who came after.
“God said to Efé, ‘Beget children to people my forest. I shall give them everything they need to be happy. They will never have to work. They will be lords of the earth. They will live forever. There is only one thing I forbid them. Now — listen well — give my words to your children, and tell them to transmit this commandment to every generation. The tahu tree is absolutely forbidden to man. You must never, for any reason, violate this law.’
“Efé obeyed these instructions. He, and his children, never went near the tree. Many years passed. Then God called to Efé, ‘Come up to heaven. I need your help!’ So Efé went up to the sky. After he left, the ancestors lived in accordance with his laws and teachings for a long, long time. Then, one terrible day, a pregnant woman said to her husband, ‘Darling, I want to eat the fruit of the tahu tree.’ He said, ‘You know that is wrong.’ She said, ‘Why?’ He said, ‘It is against the law.’ She said, ‘That is a silly old law. Which do you care about more — me, or some silly old law?’
“They argued and argued. Finally, he gave in. His heart pounded with fear as he sneaked into the deep, deep forest. Closer and closer he came. There it was — the forbidden tree of God. The sinner picked a tahu fruit. He peeled the tahu fruit. He hid the peel under a pile of leaves. Then he returned to camp and gave the fruit to his wife. She tasted it. She urged her husband to taste it. He did. All of the other Pygmies had a bite. Everyone ate the forbidden fruit, and everyone thought that God would never find out.
“Meanwhile, the angel of the moon watched from on high. He rushed a message to his master: ‘The people have eaten the fruit of the tahu tree!’ God was infuriated. ‘You have disobeyed my orders,’ he said to the ancestors. ‘For this you will die!'”
In another version, god, angered, says to the Man’s wife:

“‘You broke your promise to me! And you pulled that poor man into sin! Now I’m going to punish you: both of you will find out what it is to work hard and be sick and die. But you, woman, since you made the trouble first, you will suffer the most. Your babies will hurt you when they come, and you will always have to work for the man you betrayed.'”