Seasons greetings everyone and a warm welcome to all our new followers and hearty greetings to all our old ones. It is my sincere hope that you all had a good festive season. For all those who might find themselves broke, don’t worry, such is life. In a month or two you will have made some money to cover for your over indulgence during the holidays. With niceties behind us, we can now get to the subject of this post.

We have a theist with beef. He writes

In the discussion of the existence of God, the burden of proof falls entirely on the part of the theist.  Since the theist is the one proposing the existence of something — namely, an invisible, incorporeal, supernatural being — it is unequivocally the theist’s job to prove such existence.

It would be sufficient just to say yes. The theist bears the burden of proof. I hope this particular theist has heard of the dragon in basement analogy. To claim that the person to whom the story of the dragon is being told has a burden of proof is simply ridiculous and it is the same with religion. Why the theist thinks his claim deserve special treatment in the market place of ideas is, well, beyond me.

His first beef with atheism is

My first objection is that this position tilts the playing field; it makes atheism out to be the philosophical “default” position, which I think is neither fair nor productive in a forthright and honest discussion.

Unfortunately for him, this does appear as the case. Religion and gods are learnt. No one is born with a specific religious belief, with no knowledge of gods. Unless the word default has a new meaning, the theist cannot claim that theism is the default position.

His second beef is

that yes, atheism does make unproven claims about God’s existence — namely, that He doesn’t.

And here is the problem. There is an assumption in this statement that what god is is known to all of us such that the question that only should be answered is whether or not it exists and therein lies the problem. The theist has a first duty to tell us what god is then and only then is even this debate possible. In the meantime, the atheist can say with confidence he lacks a belief in the existence of gods/ deity. While still on this objection, what evidence has the theist adduced in support of his thesis?

A few examples that follow from the premise that God does not exist (note that some of these also assume naturalism, which while not exactly synonymous with atheism is, in my mind at least, the most defensible brand of it):

On issue #1, there is much evidence to support they are brain states.

On issue #2, why only two options. The bible can also be seen as oral tradition, a theologico-political work among many other conclusions.

On issue #3 I am interested in this mountain of evidence

On #4 I would like to know when this theist did see a universe being created. To make a demand such as this of the atheist is beyond ridiculous. No one stops the theist from offering an alternative explanation from the BB cosmology. Saying god did it is not explanation and ends up multiplying causes that then need explanation.

What I see and that must be a challenge to most theists to understand is that atheism is about a specific question. All others issues are secondary to it and each to a degree have its own specific science/ field of study. The theist however has a book that claims all the answers to all the questions.

I hate to be the deliverer of bad news, but the theist has the burden of proof. The atheist is not being lazy in demanding this of the theist. In fact, he is helping the theist to come to terms with problem at hand, that is, lack of evidence for gods/ deities.

I know this has come a wee bit late but all the same, the festive season is just coming to a close and we will soon be back to the normal things we do each day as we wait for the next holiday to spend money on people we hardly like.

I read on most blogs by American Christians about war on Christmas and wondered how bad this war is? I got solution for them though, they can all migrate to China during the Christmas season. Everywhere I turned there was a Christmas message. 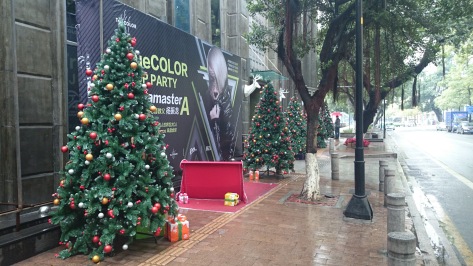