I like nude art.  However in the last few months I have noticed that there seems to be an aversion/ censorship of nude figures on most social media platforms. Even Playboy has indicated they will not have nudes on their pages.

What are your feelings on public nudity and its display on social and print media?

I just finished reading Mary Shelley’s Frankenstein or Modern day Prometheus. Victor’s desire for knowledge leads him to create a being who in his on eyes is monstrous.

When this being kills the William, Victor’s brother, he swears to kill it and a discussion ensues between them. The being tells Victor that in as much as it has done wrong, he has no right to kill him. On the contrary he makes Victor see that he has a responsibility to him. It is to Victor to make him happy, wretched as he maybe.

The question we must ask here is if the creator of a sentient thing has a right to destroy it?

are having a debate

October is breast cancer awareness month. Yesterday, a few of my friends on two wheels and I went cycling as part of the awareness campaign.

time to be entertained by Sarakasi dancers

i can’t recall why we stopped

maybe it was to eat bananas, the cyclist’s favourite energy food

And today Nairobi was coloured blue by athletes participating in the Nairobi Stanchart Marathon whose theme is every child deserves to see. 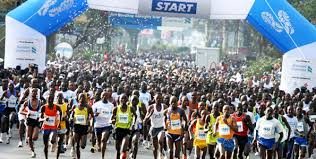 somewhere in that multitude, I can be seen

if John Baker is to believed is the life of the godless. Because of limited intelligence he is unable to see how others can find fulfillment in a life without gods. Because a person believes that at the grave, all this ends, such a person should not love, laugh, draw or enjoy music. Life is only grand if you will live past the grave. Don’t help others, they will die and that shall be forgotten all this ignoring the other very clear point that helping someone makes their life here bearable and sometimes, just sometimes, dignified. How does the promise of a heaven with gold do to the life of a poor person here apart from filling them with false hopes?

His next qualm is that people are not getting indoctrinated enough. They also don’t get to hate enough gays. He writes

which in intelligent speak is parents should indoctrinate their children and do it well they never get to reason out of superstition.

Caroline tells us naturalists are incapable of love. She writes

It would mean the depths of emotion that consume a man’s thoughts of his beloved and drive him to do anything for her, or the lengths a mother will go to care for and protect her child are merely the outworking of chemical reactions in the brain. Nothing more. It would mean that the supreme goodness we attach to the concept of real love doesn’t stick. In the survival of the fittest, why should a quality that seeks another’s good be preferable to selfishness?

At least the naturalist grounds love in the workings of the brain. She on the other hand grounds it in a superstitious, transcendent other. Why is the naturalists idea treated with so much disdain? Is it because it is logical and reasonable?

And it seems to me she hasn’t read much on the subject either, because then she wouldn’t write

because this entry in SEP, would show her statement to be wrong. And no, it doesn’t follow that because a feeling is irrational it points to god. That, my friends, is bad reasoning.

Love. We can’t even comprehend it in its fullness. And we can’t reduce it to a material reality. It transcends time, and space, and matter. It is spiritual. It is of God.

unfortunately tells us really nothing.

In a case that some of the goddites will claim persecution, a judge ruled in favour of a mother’s request that her 4 year old child be kept free from religious influence by the paternal grand parents who belong to the JW cult. The religious beliefs of the mother were not mentioned in the case.

I hope you will also stop driving as that is responsible for the deaths of 90 people per day. At the very least you should refuse to drive over 55 mph. If only the government would lower the speed limit many lives and carbon emissions could be saved. Obama should politicize that issue and call all the families of the people who die in car wrecks. He could even show up in their town and pretend to cry or whatever.

It’s perfectly reasonable to own a gun or two for self-defense or sporting purposes, or to collect antique guns as a historical interest. That doesn’t make you part of the gun problem in this country. If you are happier now great, but a normal rationale adult giving up a couple of guns is not progress against the paranoid, delusional, conservatives currently controlling the gun debate at a legislative level.

Today I went down to the local police station, and I led them out to my car and showed them the cooler in the back with my Budweisers on ice.

“I saw a wreck on the way to the lake,” I explained to the officer. “And I feel responsible. It was horrible — mangled vehicles and glass everywhere. A helicopter landed to take away a little girl. It was heart-breaking. I saw the coroner show up and of course I knew what that means. So, please, please take these beers. I was going to drink them while I fished.”

“Hey,” the officer asked, “was that the wreck down on Smith Road. A black truck and a green SUV?”

“Yes. The black truck hit the SUV. I suspect there was alcohol involved.”

“Nope. That SUV ran the stop sign. She was on her phone — texting.”

“So, really, you should turn in that nice I-Phone you have there because, in reality, it was the phone’s fault not your beer.”

“My I-Phone? Well, uh, well, you know I wasn’t texting. Or calling. Or dialing a number.”

“Uh, well, take the beers instead.”

And there are a lot more like these, I am convinced part of the reason the Americans are not going to solve this problem is because a lot of the noise is being made by stupid fucks.

Who designs a car with the intention of decimating as many people as possible, quickly and easily? Only a stupid person brings up such a silly argument.

I have also read those who claim that liberals are applying a double standard in gun rights issue. That we fight for rights such as LGBT rights, rights of women to have access to abortion if they need, right to assisted suicide so on but argue strongly against owning guns and ammunition. I don’t think this deserves an answer.

A guy writes, emphasis by yours truly

Almost all Christians believe that Jesus(pbuh) died for their sins and they wont be held accountable for their sins. In Islam Jesus(pbuh) is one of the prophets of God. Ever since the beginning of time, God sent prophets/messengers on this earth to guide mankind how to live. Adam, Noah, Moses , Jesus and Mohammed (peace be upon them all) were prophets of God. When God created Adam He taught him how to speak and the names of everything just like a mother would teach her one year old. Quran is a book of wisdom. It makes you understand the reason of the creation of the world and universe. The most wisest of men are not scientists or phd holders but those that read and understood the Quran.

And you ask yourself whether such people walk among us. As I told a good friend, men who wrote religious books, because, truth be told, they must have been men, were a blot to the human race.

I am not saying PhDs are wise, look at WLC, he is a PhD holder right? but the things that come out of his mouth are abhorrent to any thinking person. But to dismiss all PhDs and elevate only those who have a 1400yr old book to be wise is a lack of seriousness on the part of the author. One day men and women will ask themselves how they believed such nonsense for so long. I hope that day comes in my lifetime.

Ponderings of science, philosophy, history, politics, and many other topics