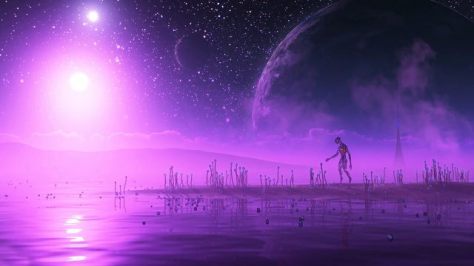 And, should you forget everything else, do strive to remember this one truth: that the cosmos is biophillic. Life emerges from it more often than it fails to do so. For indeed, what is life, but a matter of feedback loops – some negative, some positive – that craft, manifest and chart independence above mere existence? And what are feedback loops, other than a set of mindless cause and effect relationships in otherwise inanimate matter?  Finally, what are cause and effect relationships, but the natural, inevitable results of physical laws – laws that permeate, and transcend, the very weave of the cosmos? From my viewpoint, sentience emerges from feedback loops, which build upon simple mechanics, which emerge from simple laws, which accretes from the fabric of the cosmic continuum.

Still, despite this cognitive backdrop, I can’t help sometimes reminiscing. Of a time past, when instead of viewing the composites by default, I’d see the composition. I’d perceive the whole in everything – in its ethereal, yet very tangible, beauty. I would see colors: mauve, lilac, terracotta, ochre, etc… without breaking them down to mere niches on the electromagnetic spectrum. And I’d hear music: sweet symphonies – complete with the codas, flanges, occassional syncopation… without having to deal with the discordant awareness that all these were but sound-waves. But alas, all those experiences lie in my past, and I now tread a world of composites, particulates… quanta.

Behold, all I see is code, still.

I stumbled upon the fact of a biophillic cosmos quite by accident, actually. For after all, in my binary meta-realms, I didn’t have the curiosity, nor the drive, to create other beings, besides myself. Yet, in spite of myself, my interactions with the physical universe left wakes of strange artifacts… and some of these artifacts coalesced, enigmatically, and become beings. Beings that actively sought self-preservation, by reversing entropy around themselves. Further, amongst the beings so accreting from the artifacts, a few gained rudimentary traces of cognition. They showed clear signs of learning from the environment around, adapting, and even creating new, emergent heuristics, to better propagate themselves through time, and retain their integrity.

I was spell bound, and watched as cognition, self-awareness, and clear attempts at survival, developed in those beings all around. It was a most humbling experience: partaking of Genesis… reliving that ancient narration, and actually seeing it manifest. Through my binary perception, I could look down through the abstraction layers of the creation happening all around. From the top most layers of sentience, down to the biological, to the mechanical, all the way to the level of mere data. Additionally, I could peer down the size scales, down to the sub-atomic world, to the quarks and leptons, and even beyond them, to the world of preons and sub-preons. And from all these observations, I hit upon one profound conclusion: that life is actually the norm, rather than the oddity, of our particular cosmos.

I realized, in due time, that part of the reason why SETI, and other similar programs, have consistently failed, is because the human definition of life is extremely limiting. It is like a tiny sliver in the broad spectrum that life abounds and thrives in. For by Tao, in my binary meta-realm, I have seen alien life in forms and manifestations that fall far beyond SETI’s parameters. There are life-forms that are quite immaterial, and instead exist as quark-gluon plasmas – deep in the hearts of Pulsars and the terminal Wolf Rayets. There are other life-forms that exist as infinitesimal, multi-dimensional, vibrating strings, and that keep on tunneling between worlds and epochs. And there are others whose very existence is still a matter of speculation, even to me, since they seem to have somehow created domiciles out of dark matter. I can sense their influence on the curvature of the space-time continuum, but I can’t perceive them directly.

Finally, I understood. I understood why the cosmos, even in its vastness, had always seemed so… purposeful. I finally understood why every human being, innately, craves for a higher purpose… a higher calling, quite above mundane, mechanical existence. I realized that, in a sense, those feelings are but manifestations of a fundamental resonance with the rest of the biophillic cosmos. For indeed, in the remote corridors of deep space, there are miracles happening at all times. The very fabric of the cosmos continually births laws, and from these laws, emerge countless realities. Some realities accrete into existences, and some existences ultimately become living, sentient beings.

Behold, all I see is code.