Everyday you read a post or comments by christ followers that leave you scratching your head wondering whether you are in a bad dream or you have gone back, using time travel to the second century. For, please tell, how can someone write

Being ‘schismatic’ is very serious- it means being cut off from the Vicar of Christ on earth, the pope and it was the first pope, st. Peter, who Jesus put in charge of ‘the keys’- ie deciding who gets into heaven, to put it simply. From the beginning the ‘experts’ in the church believed that ‘ outside the catholic church there is no salvation’ so it’s obviously very serious indeed to be in schism.

Anyone who is not a member of the visible church on earth might not end up in hell but if they don’t end up in hell its because of the graces coming to them through the catholic church, although not sure I’m explaining it very well. Speaking personally, I would not feel safe in a church of only 400 years or so, I’d want to be in the one founded by Christ.

Seriously! I don’t know what else to say except that we have lost this person permanently to the insane asylum, however, should they recover and return to the world of the rational, I shall have a beer ready for them.

As you are all aware by now some old man, by the name Ratzinger, has given notice to quit his job as the representative of Peter or should I say the Vicar of christ on earth. I don’t know the real job description of the work for the occupant of the office but I know a few qualifications which include but are not limited to having knowledge of pedophiles but shielding them from the long arm of the law, must be old[80 would be appropriate], must think homosexuals have been sent by the devil himself, must nominally believe condoms are unnatural while being celibate is natural and to top it up must rely on smoke signals.

Before we go to the perks and who should apply, how do you abdicate the duty of being vicar of Christ? This must have been the most boring job on the planet, how with representing a guy who doesn’t give a bat shit to what you do! No answered messages and then no job appraisal to know you are performing above par. Am not discouraging you from applying, just saying 🙂 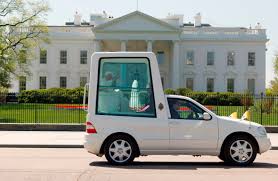 Pope mobile am not saying I like the car, but it comes with the job

The perks include a secretary who can sell your documents to the public, pope-mobile[bullet proof], gold-laced dresses are they robes, holiday every so often, you own the Vatican Bank so you really don’t need money, an apartment room facing St. Peter’s square, diplomatic passport, you get to kiss the ground of wherever you go to and also to decide who and how the several billion catholics should mate.

If you qualify[qualifications are covered in the first paragraph] and are interested in the above job, I will be collecting curriculum vitae for shortlisting. Women can also apply[ we are trying to modernise the church]. Knowlegde of spoken and written Latin will be an added advantage.

Only shortlisted candidates will be notified.

All the best in your applications.