If you have been in the pursuit of holiness and found yourself restricted by many rules or conditions, we have good news for you. And this news comes to you from St. Paul’s ambassador or the guy with the direct link to Peter, pope Francis.

Redemption, for those seeking it, comes from god. And to receive it, you need faith in the gospel message. And in case you are Jewish and still confused, the Pope ain’t making this up. He says pick your battles with St. Paul, not him.

Now you have got the message, you cannot claim ignorance when you find yourself in hell. I told you already.

The one thing I like about religious discussions is how each religion/ religious person is able to see the absurdity in the other though in this case, I think the Christian is a little confused. So without boring you fine people to death, I present the best argument against reincarnation I have found.

For us Christians, that idea is not possible ever no matter how hard you look at it and here is why. All of the facts you stated above is true for a lot of people but isn’t proof to anything. There is a scientific explanation to them that does not involve supernatural stuff, just ask any good psychologist and the will tell you how. Ecclesiastes 1v9 the world is a circle things come and go and that’s just the way it.That being said that does not mean reincarnation is involved. Humans have been the same since the begin we make the same mistakes over and over again. As christian we live and die and go to heaven (assuming we died in the hands of God). Just think simple logic here people. if we just kept reincarnating over and over then what was the point of Jesus coming to die on the cross to save us from sin? He wouldn’t have to because we could have saved ourselves by just coming back over and over again until we lived a good life. Revelation 5v4 and with so many and many another verse in the bible shows us that no one and I mean no one is worthy to go heaven or see God because we are so sinful. I could spend all day telling of verses in the bible that tells us that we can’t make it alone no matter how hard we tried. No one can save us but God. If that wasn’t enough proof to bury your little theory God specifically said to let the dead bury the dead in Luke 9v60. Do you know why he said that? because once you are dead there is nothing you can do to save yourself because it’s all over. Read Psalm 115v17 or even Isaiah 38v18 to help you understand how wrong you are about all of this. It does not get much clearer than that. We should read our Bible to find the answer to tell of our questions or else we get confused. I pray that God opens your eyes to more questions that troubles you 🙂

That will be all for today.

I am beginning to believe there is an outbreak of craziness in some of the christian minds who hosts blogs on the web. In the god watching suffering question by Violetwisp, there is this comment

Having said that, I hasten to add this fellow must be confused. You can’t live for someone else, you would sooner die than live for someone else if you thought your life no longer had any meaning for you. And there is nothing wrong with being selfish. But the christian obsession with narcissism gets to my nerves. I am so special, the god of the universe intervened to make my shitty life exemplary and am going to spread this bullshit to everyone who can listen to the crap I have to write.

and Pst. Steve Finnell does it. He has saved 3000 to begin with. Below is a comment from him that went to our spam and we think it is good for all your hell bound souls.

The new covenant church was established on the Day of Pentecost 33 AD. Three thousand men were converted to Christ as a result of the preaching of the apostle Peter. What was Peter’s message?

Churches in the U.S.A. are either losing members, or are experiencing stagnation. What are the reasons for declining membership in the body of Christ?

What did Peter preach that inspired three thousand men to be converted to Christ?

1. Peter preached: Acts 2:21 And it shall come to pass that whoever calls on the name of the Lord shall be saved.” (NKJV)

Peter did not say all who have been individually selected for salvation will be saved. Nor did Peter confirm that most men have been selected to burn in hell and therefore have no free-will.

2. Peter preached: Acts 2:22 Men of Israel, hear these words; Jesus of Nazareth, a Man attested by God to you by miracles, wonders, and signs which God did through Him in your midst, as you yourselves also know—(NKJV)

3. Peter preached: Acts 2:31-32 :he, foreseeing this, spoke concerning the resurrection of Christ, that His soul was not left in Hades, nor did His flesh see corruption. 32 “This Jesus God has raised up, of which we are all witnesses. (NKJV)

Peter did not say that the Jerusalem church of Christ had a lot of church activities for the youth such as musical concerts, field trips etc. nor did Peter the note the good food at the church dinners and stress the wonderful church campus.

4. Peter preached: Acts 2:36 “Therefore let all the house of Israel know assuredly the God has made this Jesus, whom you crucified, both Lord and Christ.” (NKJV)

Peter did not say I am not going to judge anyone who disagrees with my message. Peter did not say if you accept Jesus as Lord and the Christ, and give money to the church, you will become wealthy and healthy.

5. Peter preached: Acts 2:37-38 Now when they heard this, they were cut to the heart, and said to Peter and the rest of the apostles, “Men and brethren, what shall we do?” 38 Then Peter said to them, “Repent, and lets every one of you be baptized in the name of Jesus Christ for the remission of sins; and you shall receive the gift of the Holy Spirit. (NKJV)

6. Peter preached: Acts 2:40-41….41 Then those who gladly received his word were baptized; and that day about three thousand souls were added to them.(NKJV)

Is it possible that there is a causation and correlation between the lack of Biblical preaching and declining church growth and lower church attendance?

Christianity is about Jesus Christ it is not about church programs nor is it about man-made doctrines.

Our god believers tell us that we are gods’ special creation, that everything that has happened since the beginning of time was to culminate in man, who they tell us is at the apex of nature. To this claim, d’Holdbach has such a beautiful response.

This dogma[that of the immortality of the soul] was received with avidity, because it flattered the desires, and especially the vanity of man, who arrogated to himself a superiority above all the beings that enjoy existence, and which he would pass by and reduce to mere clay; who believed himself the favourite of god, without ever taxing his attention with this other fact- that god makes him every instant experience vicissitudes, calamities and trials, as all sentient natures experience; that god made him, in fine, to undergo death or dissolution, which is an invariable law that all that exists must find verified.

We have been accused of degrading man by comparing him to other brutes, to say that he is just an animal albeit with intelligence which most members of its species seem to have in less capacities to the brutes in question or if they have, they never get to use. To this charge, he responds thus

it is unnecessary to tell me that we degrade man when we compare him with the beasts, deprived of souls and intelligence; this is no leveling doctrine, but one which places him exactly where nature places him, but from which his puerile vanity has unfortunately driven him. All beings are equal; under various and different forms they act differently; they are governed in their appetites and passions by laws which are invariably the same for all of the same species; everything which is composed of parts will be dissolved; every thing which has life must part with it at death; all men are equally compelled to submit to this fate; they are equal at death, although during life their power, their talents and especially their virtues, established a marked difference,  which, though real, is only momentary.

He then writes about the absurdity of the trinity. He writes

the first of these mysteries is the trinity, which supposes that one god, self existent, who is pure spirit, is, nevertheless, composed of three divinities, which have obtained the names of persons. These three gods, who are designated under the respective names of the father, son and holy ghost, are, nevertheless, but one god only. The three persons are equal in power, in wisdom, in perfections; yet the second is subordinate to the first, in consequence of which he was compelled to become a man, and be the victim of the wrath of his father. This is what the priests call the mystery of the incarnation. Notwithstanding his innocence, his perfection, his purity, the son of god became the object of the vengeance of a just god, who is the same as the son in question, but who would not consent to appease himself but by the death of his own son, who is a portion of himself. The son of god, not content with becoming man, died without having sinned, for the salvation of men who had sinned. God preferred to the punishment of imperfect beings, whom he did not choose to amend, the punishment of his only son, full of divine perfections. The death of god became necessary to reclaim the human kind from the slavery of satan, who without that would not have quit his prey, and who has been found sufficiently powerful against the omnipotent to oblige him to sacrifice his son. This is what the priests designate by the name of the mystery of redemption. 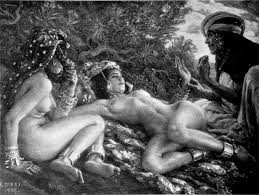 Ladies, don’t listen to him, that is the devil himself

There are gems, then there are gems and this is in the second class. And since yours truly believes that sharing is living, I want you my friends to be able to tell when Satan convinces you to question your [non] belief. Have a good laugh friends.

8 Ways Satan Convinces You To Question Your Salvation